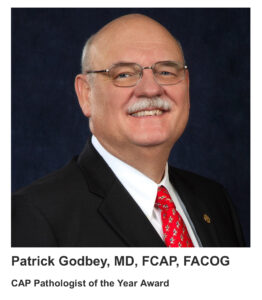 NEW ORLEANS, La–The College of American Pathologists (CAP), the world’s largest organization for the medical doctors who diagnose and study disease, recognized several of its members for their contributions to pathology and laboratory medicine during its annual meeting, in New Orleans, Louisiana October 8-11, 2022.

In recognition of his long and distinguished career in pathology, the CAP named Patrick E.T. Godbey, MD, FCAP, Pathologist of the Year. During his 30 years as a CAP member, Dr. Godbey served two full terms as a member of the CAP Board of Governors. He was the chair of the Council on Government and Professional Affairs, overseeing the direction of the organization’s legislative and regulatory advocacy efforts on behalf of patients, pathologists, and medical laboratories, and he has led numerous CAP councils and committees.

“I am humbled to be named the Pathologist of the Year. So many pathologists immediately took up the fight against COVID-19 and we much more than answered the call,” Dr. Godbey comments. “It was my privilege to lead the CAP during this most challenging of times. I am certainly honored to be the recipient of this prestigious award, but I know that there are a large, large number of Fellows in this College who are also truly Pathologists of the Year.”

From 2019 to 2021 Dr. Godbey served as CAP president. He skillfully led the CAP through the COVID-19 pandemic by positioning and promoting pathologists as indispensable. He also increased the flexibility and visibility of the laboratory throughout the pandemic. In addition, he led the CAP during the social justice movement of 2020, during which he condemned racism, inequity, and discrimination in any form. Dr. Godbey directed the formation of the CAP’s Diversity, Equity, Inclusion Committee. Further, Dr. Godbey conceived and helped direct the pathologist’s pipeline initiative, working to introduce the pathology specialty to more medical students.

Dr. Godbey joined the Southeast Georgia Health System medical staff in 1983 as an obstetrician and gynecologist before transitioning to the practice of anatomic and clinical pathology. He is a Fellow of the American College of Obstetricians and Gynecologists, a board member of the Georgia Association of Pathology, and a member of the Alpha Omega Alpha Honor Medical Society, Phi Beta Kappa, the Chinese American Pathologists Association, and the Florida Society of Pathologists.

Dr. Godbey founded Southeastern Pathology Associates where he serves as CEO and laboratory director. He is also the chief of the Department of Pathology at Southeast Georgia Health System in Brunswick, Georgia and chair of the board of the Camden Healthcare Network.

In addition to the Pathologist of the Year award, the CAP recognized 19 other members/residents for their contributions, achievements, and service in a multitude of areas, including but not limited to advocacy, patient care, education, quality improvement programs, and communications.

About the College of American Pathologists

As the world’s largest organization of board-certified pathologists and leading provider of laboratory accreditation and proficiency testing programs, the College of American Pathologists

(CAP) serves patients, pathologists, and the public by fostering and advocating excellence in the practice of pathology and laboratory medicine worldwide. For more information, visit: newsroom.cap.org and yourpathologist.org to watch pathologists at work and see the stories of the patients who trust them with their care. Read the CAP Annual Report.

SEPA IS HIRING - JOIN OUR TEAM